In my Thursday Thoughts post last week I mentioned my new mantra "Finished imperfectly is better than unfinished perfectly". If I knew how to make a blog button I'd make one! I think I'm going to need it...

Thursday night I pulled out my Valentine's Day Table Runner UFO, assessed where it had been left and quickly finished piecing the heart section. I gave it a good press and added the background fabric border and the pink border. 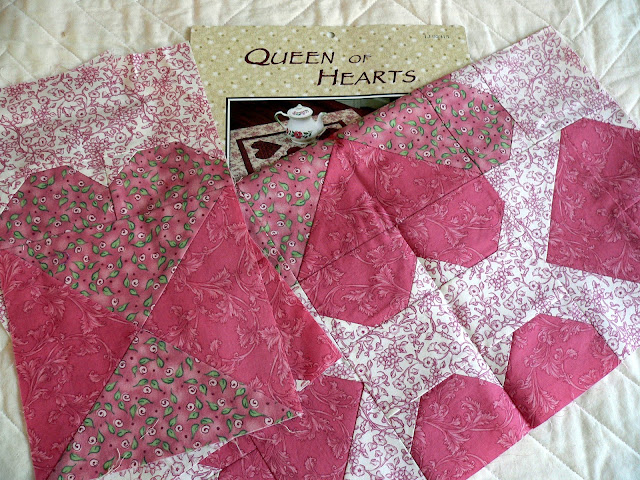 After easy sewing and a quick press I laid it out on my table to admire it. Yikes! How many waves can you count? I pressed it again and just made it worse so I set it aside (my normal reaction to imperfect!). At least I didn't stuff it into the garbage like I used to - thanks again Mom for all of those projects you rescued for me! 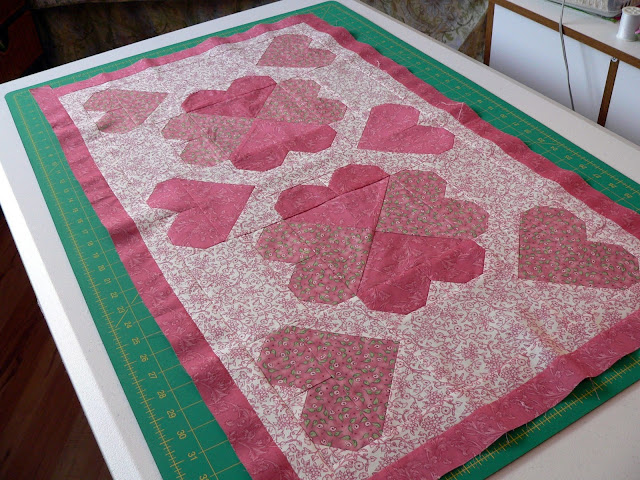 On the Threadbias board you can flag a project as "being in distress" so I uploaded my pics yesterday and asked for advice. I quickly received several answers and one of them gave me an "A-ha Moment" with the mention of uneven feed.

I have sewed on my Pfaff for 10+ years. The IDT (built in walking foot) has taught me to rarely pin, rarely measure and I NEVER have waves. And, to make it even worse I just take it for granted! To get the same results on my Juki 2010Q I must pin and must measure my borders. Lesson learned along with a renewed wave of love for my Pfaff.

Regarding imperfect... I can't live with this! I've started in with the seam ripper and will finish the piecing on my Pfaff.

Friday night I went downstairs to pull batting for another Warm Wishes quilt and found I was out of Warm & White. But, I had read a blog about fusible batting that day which had reminded me that I had some June Tailor laying around that I'd bought on sale a while back. Let's try it!

The quilt top fused perfectly and I was pretty darn excited thinking I have 2 large bags to use up. The backing didn't fuse quite so well so I added some pins around the edges and scattered across the middle. Again, nothing unusual. I started to quilt it and the top looked fantastic! I peeked at the back. EEK! I frogged one row and tried it again with the same result.

By this time I was frustrated and fighting my natural urge to set it aside. I forced myself to just keep going and finish the vertical grid. I knew going horizontal with anything would be a total disaster. Then inspiration... how about doing some walking foot wavy lines down the middle of the blocks? And, how about just making them random? How bad can it be? 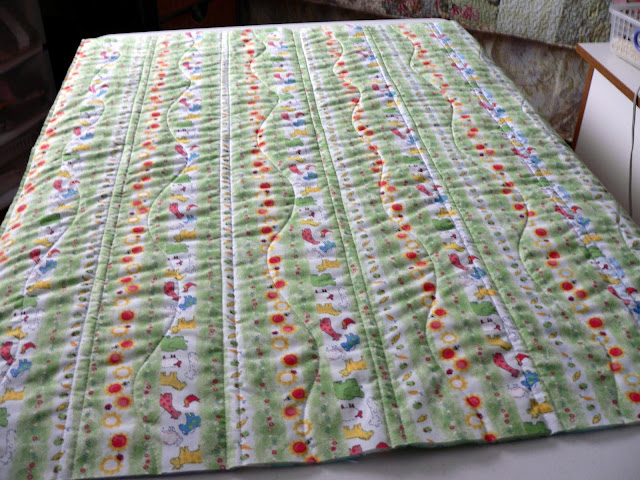 As it turns not... THIS is imperfect that I CAN live with! I think after washing it will be even better. I did purposely sew one tuck along the left side to gather some fullness and that's just the way it's going to stay. I see that I have the animals upside down in my pic - how fitting is that?  But, look at the pretty top! 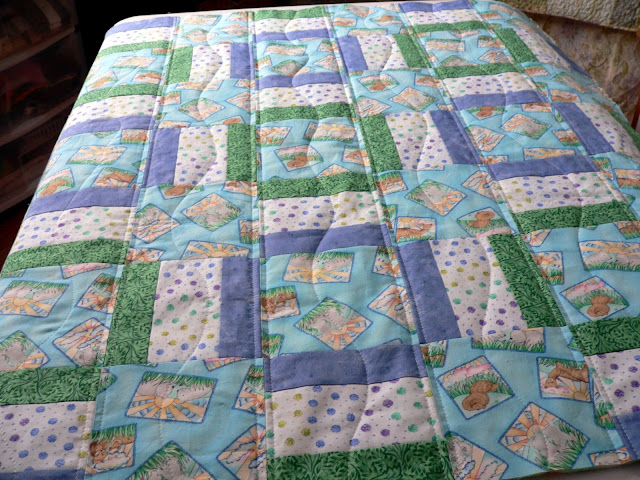 I see more walking foot curves in my future!  Fast, easy and fun. And, I'm batting .500 on "Finished imperfectly is better than unfinished perfectly". That's a whole lot better than having 2 projects stuffed in the garbage!
Posted by Deb@asimplelifequilts at 9:34 AM