I'm thinking most quilters (with the exception of start-to-finish quilters) have stalled projects that weigh on their minds. I have 4 of them that I would put in that category. These projects make me feel sad and frustrated - even though they are out of sight they are NOT out of mind. I'm hoping that by posting about them and putting them back in my sight I will be motivated to do something about them.

The 1st one is a WIP - my "And Sew On" blocks. A paper pieced block a month doesn't seem like much of a commitment, but I am 3 months behind. The problem isn't a lack of love because I think these are just about the cutest things ever! 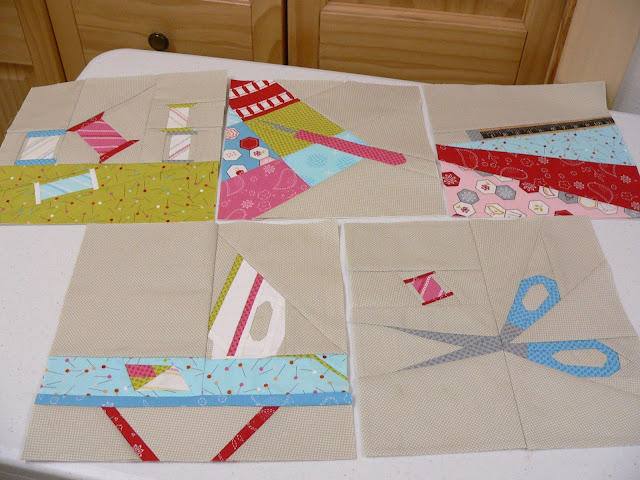 The real issue is that these blocks intimidate me. The first ones were pretty easy but now the complexity curve is getting high. The blocks for last month (stash closet) and this month (sewing room) are definitely out of my comfort zone. I'm not saying I can't do them, I'm just saying I'm rather dreading them.
Stalled Project #2 (Easter Stacked Coins) has been on my quarterly goals list for Q1, Q2 and Q3. That alone is part of my problem - the longer a goal stays untouched the less motivated about it I seem to be. But the real issue with this UFO is that I'm not overly fond of it anymore. The pastel colors aren't really my thing and the stacked coins layout isn't very exciting to me. On the plus side, it's only several easy seams to a finished top and there is always the chance that once assembled I'll like it better! 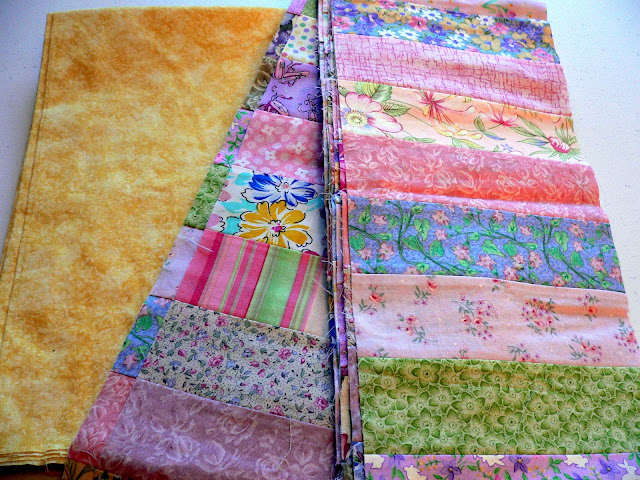 Stalled Project #3 (Four Patch & Friends) has been on my goals list since last fall. I absolutely LOVE this top. I worked on it last winter and have posted a few times about it on the blog. I had trouble choosing a fabric for the inner border. I had some blocks that were poorly done that I unpicked and resewed. I had one block with a backwards background fabric piece that I discovered in the middle after the top was partially assembled.

But I've concluded that my biggest issue with this UFO is that it is linked in my mind to my fallout with my LAQ over the last 2 quilts she did for me when she mixed up the backings. This quilt was next on the list to be sent out. It's stalled for emotional reasons. 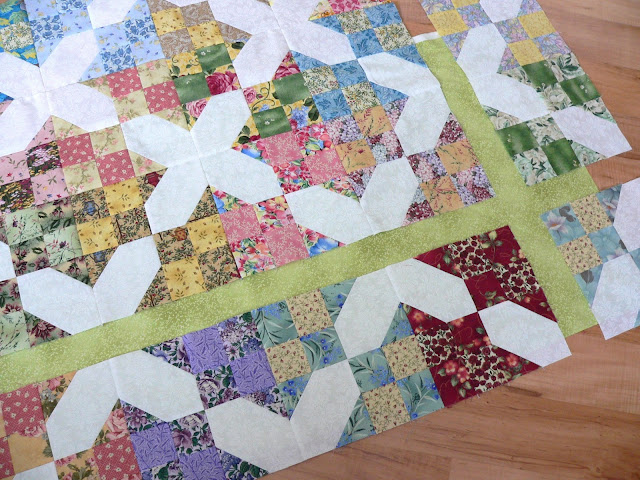 Stalled Project #4 (Thimbleberries Jacob's Ladder) has also been on my goals list all year and it's been my failed "A Year Of Lovely Finishes" goal in July and August after I finally got it to flimsy stage in late June. I love this top too and I'm determined to quilt it myself. It's a little larger than what I'm used to doing so that is a bit challenging, but I know I can do it. I just need to START! 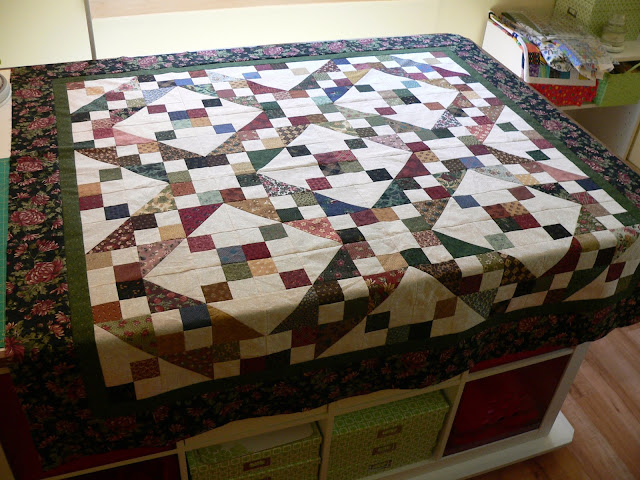 One of these projects is going to be my September goal for "A Year of Lovely Finishes". As much I would love to pick one of my non stalled projects I know that's a cop out. Avoiding them isn't making them go away! My usual thing is to pick the hardest one in hopes of motivating myself which in this case would be my "And Sew On" blocks.

But, in this case I'm going to chose "Four Patch & Friends". My goal is to get this top to flimsy stage and mail it off to my new LAQ. It's funny because the quilts with the mixed up backings are finished and I'm mostly over my disappointment with them. I seem to be letting this beautiful quilt sit unfinished instead and it's time to move on. In fact, it is going up on my design wall ASAP.

How do you deal with stalled projects? Leave me a comment and tell me all about it!
Posted by Deb@asimplelifequilts at 7:00 AM

Email ThisBlogThis!Share to TwitterShare to FacebookShare to Pinterest
Labels: A Lovely Year of Finishes, Thoughts, UFO