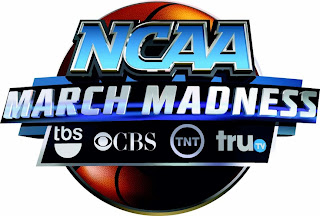 which is very random if you consider that I don't follow College Basketball one bit during the season. If my husband has a Minnesota Gophers game on I'll keep him company while I do some hand work or read, but I don't really care if they win or lose. I'm not a fan of the NBA either.

But the NCAA Tournament is one of my favorite things. I've been thinking about why I enjoy it so much and have come up with the following reasons:

Actually this tournament I have my Embroidery Blog Hop project to work on during the games this week and I will also be organizing/folding some fabric while watching so I won't be lazy ALL of the time. I especially love being to able to flip around 4 channels and catch all the great finishes!

I'm linking up to Really Random Thursday@Live a Colorful Life.
Posted by Deb@asimplelifequilts at 10:16 AM