Shabby Strings is now a flimsy!~ 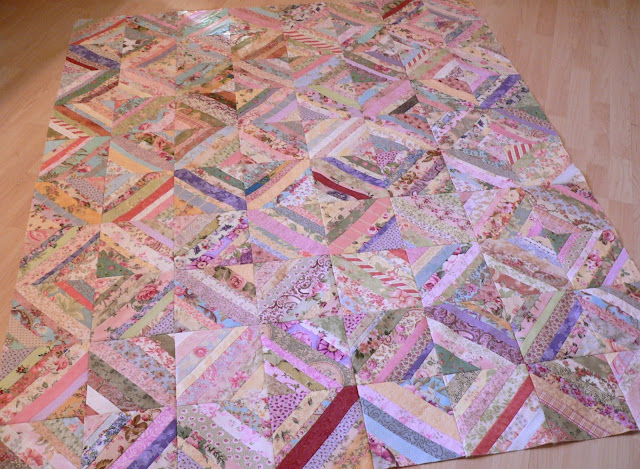 Better photos will have to wait until it comes back from quilting... off it goes in today's mail. I see a little beam of sun up at the top, I took this pic on my kitchen floor this morning because my quilting room floor is the staging area for my Four Patch & Friends blocks. 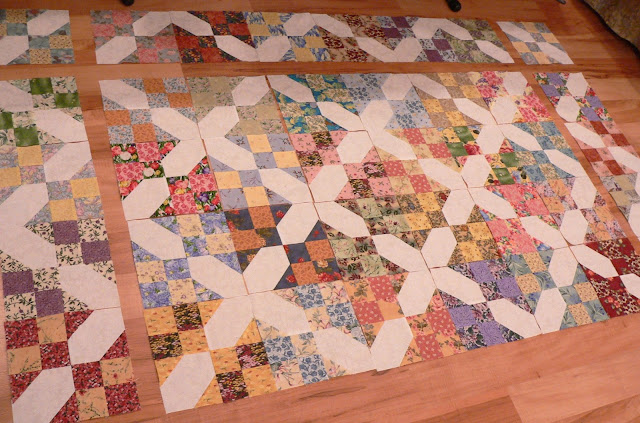 This is the top half of the quilt. There are 80 blocks in this quilt - 40 pairs and there is a fabric that repeats in 2 pairs each. In other words 4 blocks share a fabric but there are 2 identical blocks. Laying out scrappy blocks is a task that I can spend a lot of time doing and waste even more time second guessing! So, I decided to break the task in two and just lay out the top half with 1 of each identical block.

To recap my thought process as I laid this out last night:

I scattered the "stand out blocks" randomly first.  Then I filled in with colors that aren't used much like purple, pink and green. Again I tried to scatter them throughout the top. Some of the fabrics are directional so I tried to address that. Then I took the remaining blocks that shared a fabric and spread them out.

I took some pictures and reviewed those on my large computer monitor, switched a few around and left them overnight to simmer. And, I've accepted the fact that I do have yellows touching in the bottom left area - but pale yellow to gold I can live with. It's more important to not have upside down tulips!

There is a strip of sashing that separates the sections. In the book "Open up a Can of Worms" by Debbie Caffrey she used a Moda marble in a bluish green. I'm going to get the blocks sewn together and then pull some test fabrics from my stash. 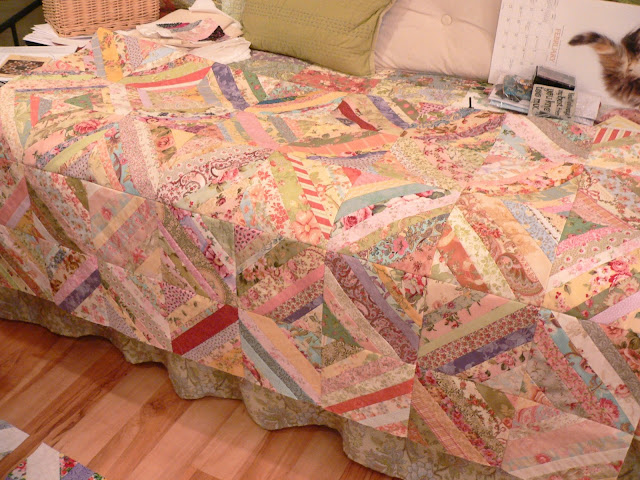 I'm including this shot of Shabby Strings folded over on the trundle bed last night because the colors are better than my first pic. My quilting room has NEVER looked better than it did about 10 PM last night!

I'm linking up to WIP Wednesday at Freshly Pieced.
Posted by Deb@asimplelifequilts at 8:01 AM