Do you like quilts with sashing? I used to be intimidated by it especially when cornerstones were involved. During the last year I have done a complete 180 degrees however to LOVING sashing with cornerstones!

My favorite thing is how sashing sets off the blocks and calms the quilt. I think the cornerstones make it so much easier to keep the top square during assembly and they add such a nice visual detail too. A little extra work - sure - but I think they are well worth it in the end. 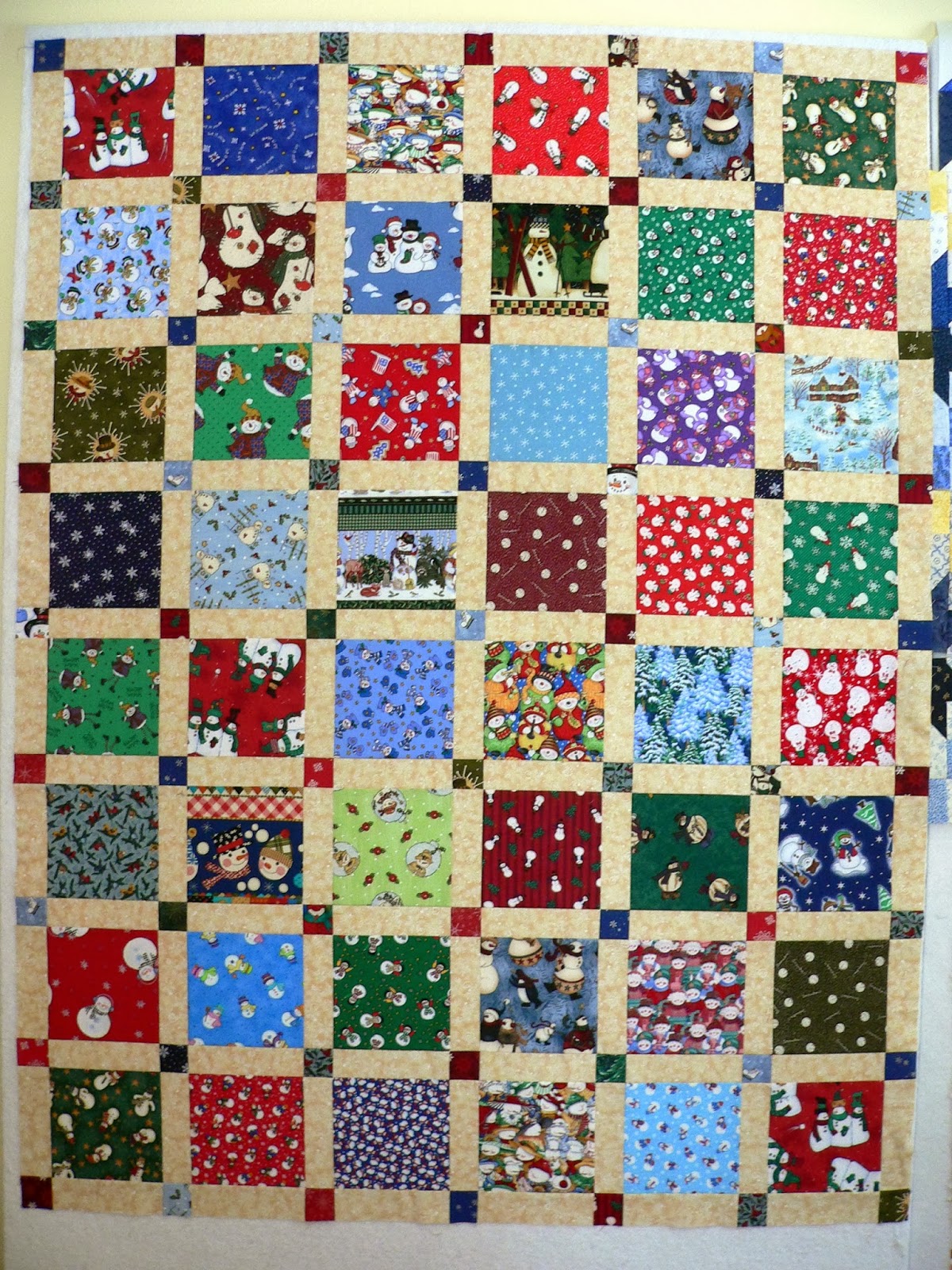 Charming Snowmen is completely sashed, I did the pinning during the NFL games on Sunday and sewed them together during the commercials. My husband and I had Denver & Seattle as our pool teams when the playoffs started and have agreed to split the pot between us so now I have some extra stash funds to spend! I'm a huge fan of Peyton Manning so will be cheering for the Broncos in 2 weeks although I like Seattle as well. 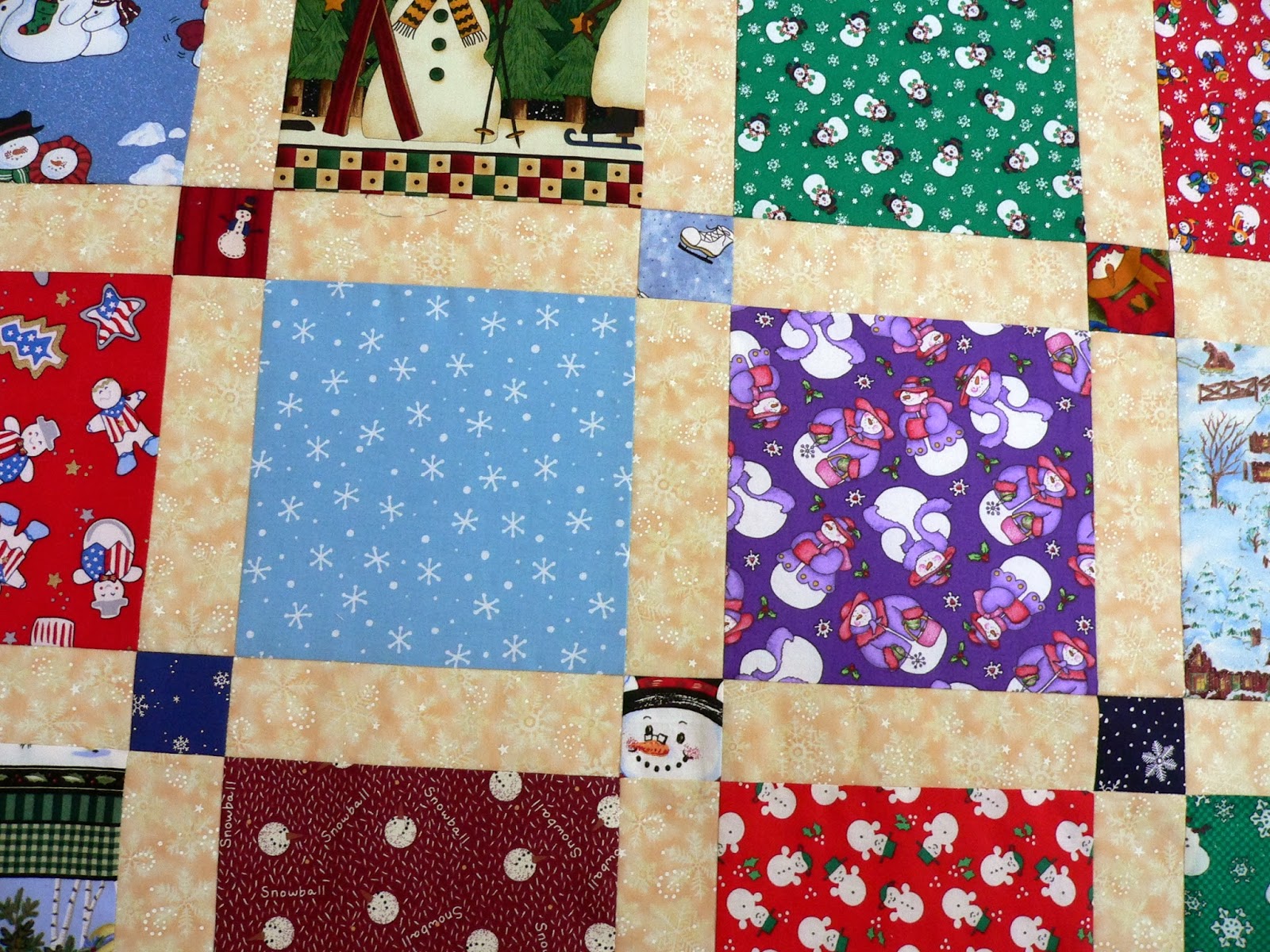 I decided to do scrappy 2" unfinished cornerstones since I had quite a few already cut in my bins. Some are fussy cut and others aren't. 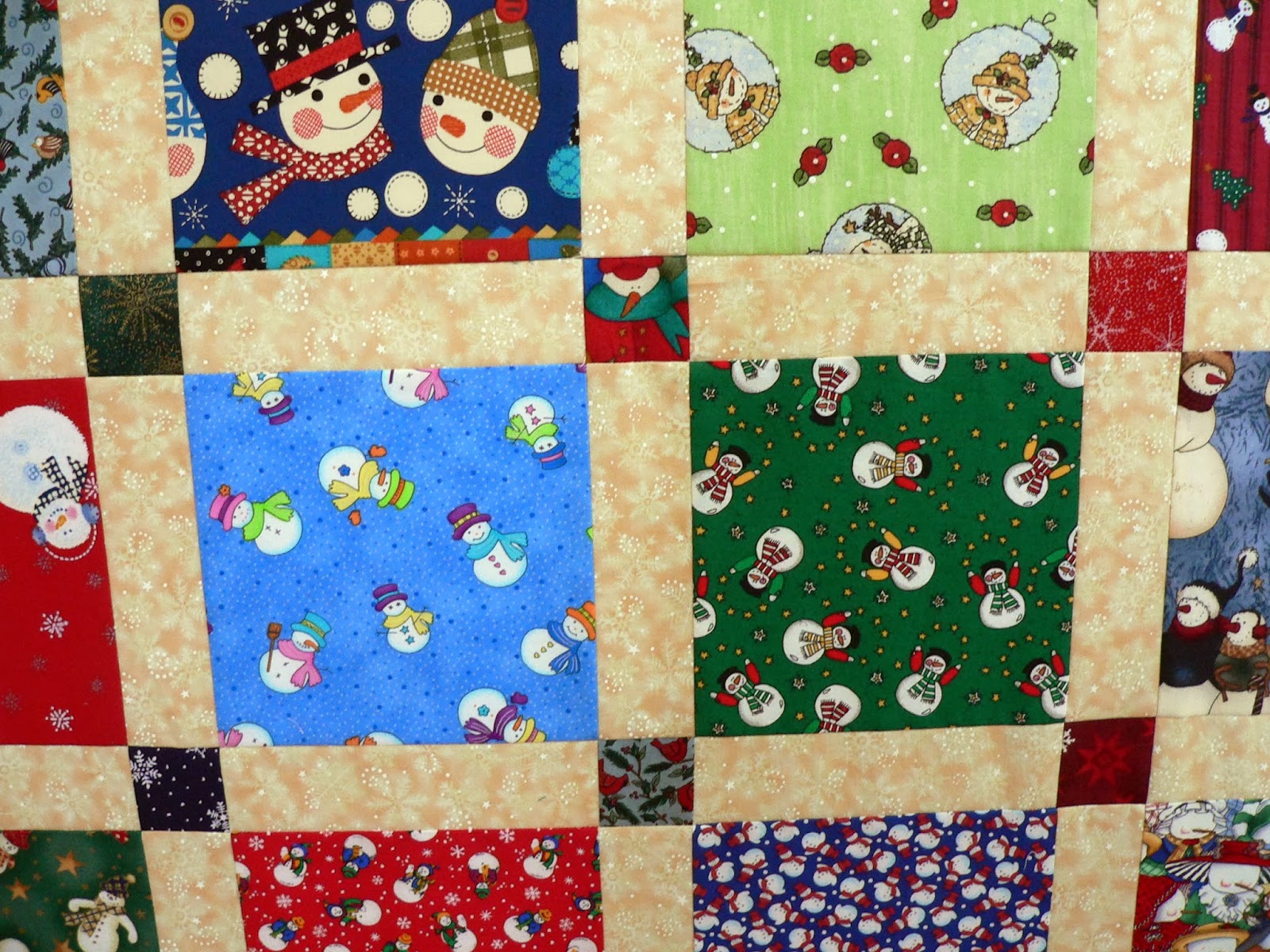 I found this fabric in my stash to use for the outer border even though it says Merry X-mas in tiny script for my winter quilt because it's the perfect scale, it's cute and it's just the shade of blue I had in mind. I should have plenty left over for a pieced backing with some of my leftover squares too. 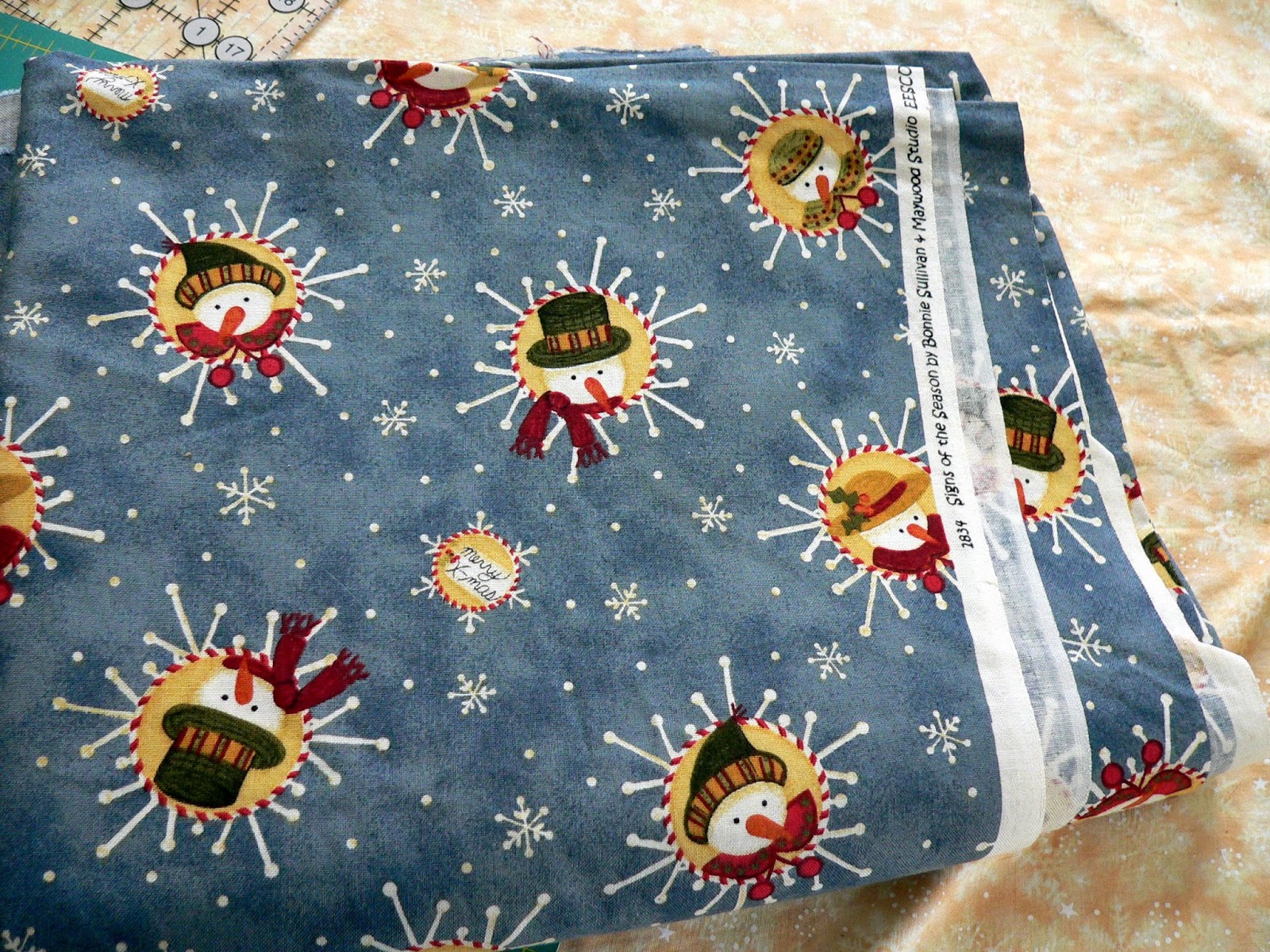 Today I'm working on getting Charmed Pinwheels assembled with, of course, sashing and cornerstones! Here is an old pic from November when I last worked on this UFO. I'm using white solid for sashing and I have yardage of one of the prints for the cornerstones and outer border. 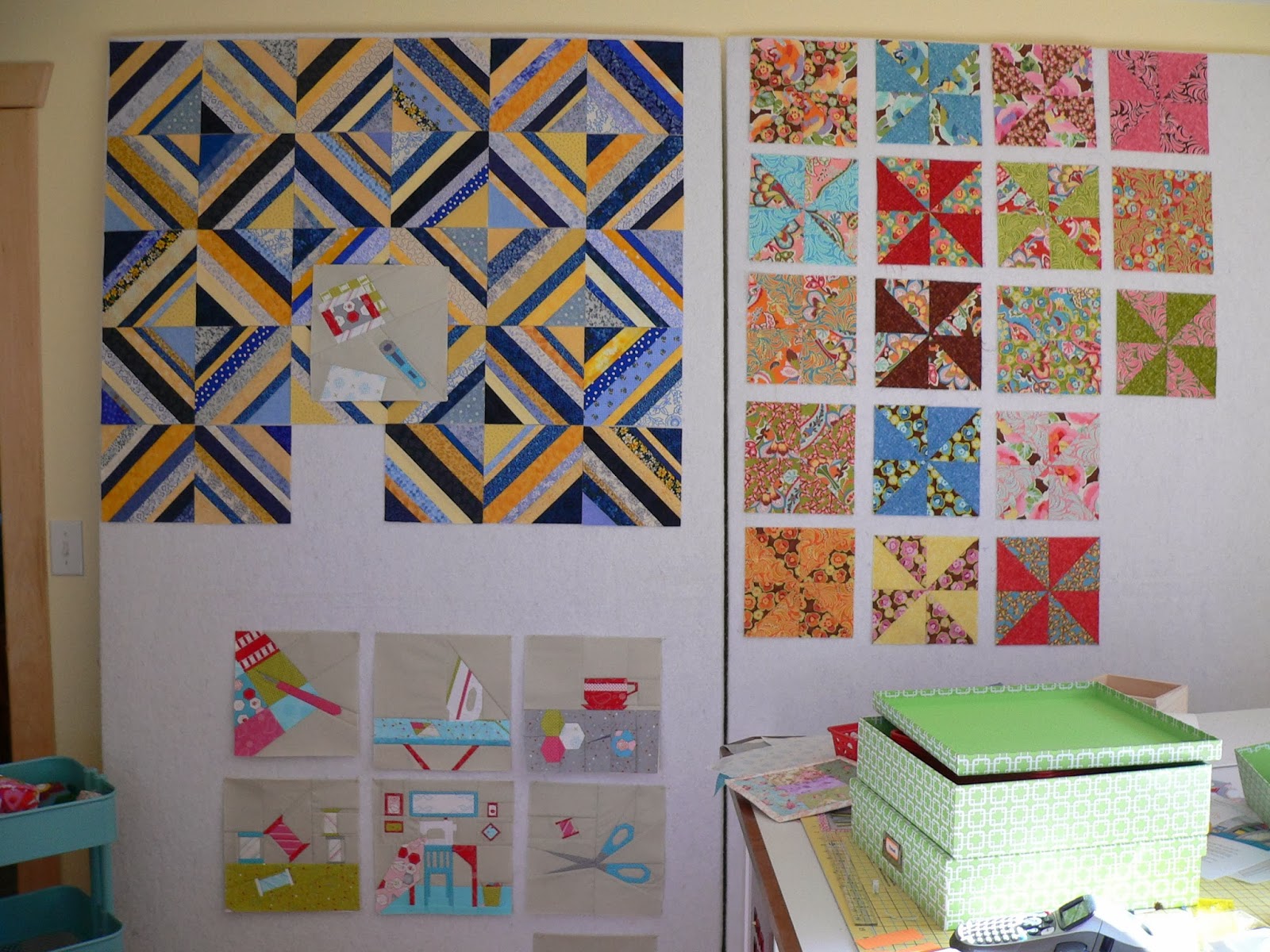 Then I'll pull out my Pfaff and get the borders attached and backings made for my tops in the quilting queue. I love using the built in walking foot for long seams with very little measuring or pinning. With month end approaching the Finish Line looms... it's time to move from piecing to quilting!

I'm linking up to Freemotion by the River.
Posted by Deb@asimplelifequilts at 11:14 AM

Email ThisBlogThis!Share to TwitterShare to FacebookShare to Pinterest
Labels: Sewing for the Seasons, UFO